Bat Out Of Hell: The Musical... 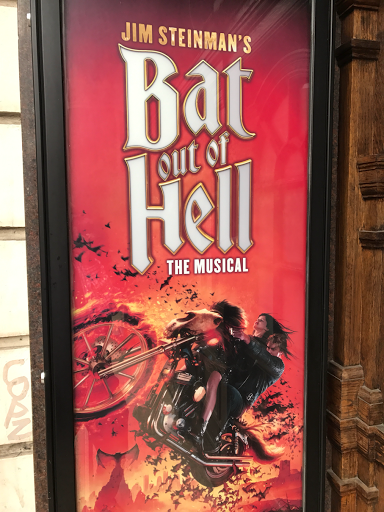 Last night Stuart and I went to see Bat Out Of Hell: The Musical at the Coliseum in London's glitzy West End.

While it is known as one of the most iconic rock albums of our time, Meat Loaf’s Bat Out Of Hell was originally written as a musical back in 1977 by king of the power ballad, Jim Steinman. Now, 40 years on, his work is brought memorably to life as a raucous rock opera - and boy, have the team gone hell for leather (pun intended) with this one.

First, the bad stuff. The script is dire. If any words should fill you with dread it's, "Our story takes place in a dystopian future..." But wait, there's more... "as you join the eternally young Strat (Andrew Polec) and his wild gang, The Lost, while they roam the streets of post-apocalyptic Obsidian, ruled by the tyrannical Falco (Rob Fowler) and his wife Sloane (Sharon Sexton). When Strat falls in love with Falco’s daughter, Raven (Christina Bennington), he sets out to rescue her in a full throttle tale of teenage love, youthful rebellion and living the rock‘n’roll dream." So far, so 'We Will Rock You'.

Yes, we are in full-on ham territory. At times the oft teased line "Would you offer your throat to the wolf with the red roses?" line seemed positively Shakespearean by comparison to the gloriously shouted, "let your heart race faster, until it catches up with MINE!".

The staging was good though; acrobatics, live filming, dancing, pyrotechnics, 50 foot high projections, motorbikes, cars, flames, smoke... it was all going on.

And the pace was breath-taking as the cast tore through Jim Steinman and Meat Loaf’s greatest hits belting out I'd Do Anything for Love (But I Won't Do That), Paradise by the Dashboard Light, Dead Ringer For Love, and Bat Out of Hell. In fact, the singing was pretty much damned flawless throughout.

Sure, it was all a bit Rocky Horror at times, (if that comparison does not flatter it too much) and the script did make you cringe. However, after 40 years it was about time Bat Out Of Hell made it off the starting blocks.

Did we needed it? Yes. Did we want it? Yes. But were we ever going to love it? No. So Two Out of Three Ain’t Bad.

The song set-list was:-

Act Two
In the Land of the Pig, the Butcher Is King
Heaven Can Wait
Objects in the Rear View Mirror May Appear Closer Than They Are
Teenager In Love
For Crying Out Loud
You Took the Words Right Out of My Mouth (Hot Summer Night)
I've Been Dreaming Up a Storm Lately
Not Allowed to Love
What Part of My Body Hurts the Most
Dead Ringer for Love
Rock and Roll Dreams Come Through
It's All Coming Back to Me Now
I'd Do Anything for Love (But I Won't Do That)
Finale (Bat Out Of Hell reprise)