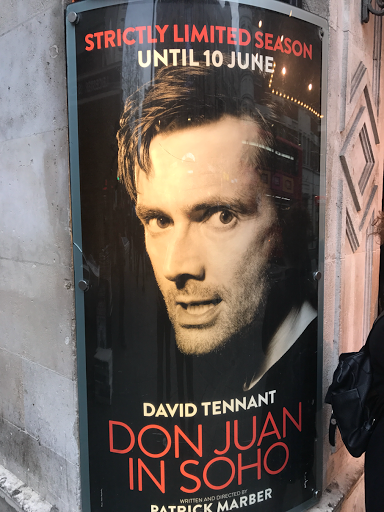 Last night Stuart and I went to see David Tennant star in Don Juan In Soho at the Wyndham's Theatre in London's glitzy West End.

Patrick Marber's version of Molière's story about a serial seducer of women transports the action to contemporary London. It is rude, it is crude, and it is very, very funny.

Tennant plays the recently renamed DJ as a magnificent, terminally bored, quasi-toff who beds, dumps and cruelly taunts his conquests. He is dangerous, sleazy, a hedonist, and he is not fussy about orifices either, “He'd do it with anything – a hole in the ozone layer.”

Is DJ one of J. M. Barrie's Lost Boys? Is he the Devil incarnate? Or just a sex addict?

Fans of Tennant will love this. The critics have been somewhat sniffy. Critics? Cretins!