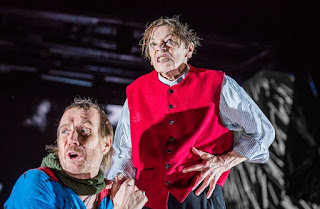 Last night Stuart and I went to see the mighty Glenda Jackson take on the Herculean task of performing King Lear at the Old Vic in London's glitzy Waterloo.

Synopsis: Great play. Lousy production. It's never a good sign when people walk out of a show or don't come back after the interval. Here they did - in numbers.

First the good; Glenda the Good...

So Glenda Jackson is back. The ex-Labour MP for Hampstead and Kilburn has made the short walk across Hungerford Bridge from the back benches of the Houses of Parliament to the front of the stage on the Old Vic Theatre. And it's a triumphant return.

Aged 80 and with a deep, sandpaper voice hone both from an illustrious stage career and in the House the wizen Jackson was ideally suited to play this shouty, misguided, vain, and foolish king. She totally steals the show; again and again proving she has lost none of her unearthly powers to captivate an audience. Her Lear is throaty, aggressive and bad-tempered but cleverly avoids playing on our sympathies even when dementia, madness and tragedy strike.

In Act I Scene I when Lear challenges his three daughters to say who loves him the most we know it’s all going to end in tears. But when he banishes one and divides the kingdom between the other two we see a greater tragedy ahead.

Cleverly Jackson injects her Lear with such confidence, power and ferocity that she makes this particular tragedy seem more like destiny than pure happenstance. It's a truly magnificent performance.

However, that is probably all I have to say that is good about this particular show.


To the production itself...

This modern dress take was frankly utterly amateurish. It came across as "sorry about the blue plastic chairs but this is the last run-through rehearsal in our East End warehouse before we move to a proper theatre with proper set and a proper costumes".

Talking of which there was no continuity with the costumes and the standard device of giving visual clues via colour as to who was aligned to whom was completely missed.

And the set... what set? It was dull and featureless.

The entrance at the back meant it took ages for an actor to walk to the front to start to say their lines. Sometimes the other actors would just watch them walk downstage. And in the final scene when Lear is tugged on stage riding on a blanket her wail lasts for over a minute as she gets dragged all the way to the front. Bizarre.

And don't get me started on the interminable setting up and striking of trestle tables behind the actors. It was noisy and distracting.

The storm scene with its billowing black-plastic sheeting? Laughable.

Oh and get that fridge door fixed.

And its long. Three and half hours long. And the time went very, very slowly.

Fantastic though it was to see a glittering array of well-known actors there was precious little to commend in any of their performances. They were poorly directed, didn't listen to each other as characters but simply battled for the audience's attention shouting their lines at each other and us.

Celia Imrie as Goneril continually mugged off like Miss Babs from Acorn Antiques. She even got some yellow rubber gloves out to wipe the floor.
Jane Horrocks as Regan was unpowered and lifeless.
Rhys Ifans played The Fool far too broadly and not as wittily as his lines deserved. Putting eggshells in your eyes and doing "Grasshopper" impersonations stopped being funny in 1976.
Did we need to see Simon Manyonda as Edmond showing his arse and having a wank? Twice.
Did we need to see Harry Melling (Harry Potter's Dudley) as Edgar stripping off completely and over-acting for England? I noted he also completely threw away the beautiful clifftop speech - a tragedy in of itself.
At least when Karl Johnson's Gloucester had his eyes plucked out and chucked into the stalls he was spared seeing any further embarrassment on stage.

Written in 1606 - or to be more accurate rewritten in 1606 - King Lear was based on an existing manuscript. Shakespeare had made many changes though; turning the happy ending into an utter tragedy, making the traitors' undoing an intercepted letter (a plot device straight out of the previous year's Gunpowder Plot) and changing "I smell the blood of a English man" to "I smell the blood of a British man" to assuage his patron the new King James who was hell-bent of uniting the countries of England and Scotland into a single United Kingdom of Britain.

Shakespeare's theme throughout Lear is 'nothing'. The characters earn nothing, deserve nothing and end up with nothing. And as Lear says to his Fool, "Nothing comes of nothing."

So rather like this production - a was all  bit of a nothing (but for Glenda!)

Posted by overyourhead at Friday, November 25, 2016