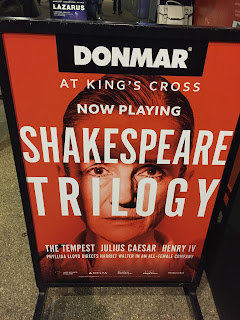 Last Friday night Stuart and I went to see the first in the trilogy (but the final for us) of the all-female Shakespearean Donmar productions - Julius Caesar - at the pop-up theatre in increasingly glitzy Kings Cross.

And for us we had saved the best till last.

Directed by Phyllida Lloyd and starring the usual cast of excellent actors the story of conspiracy, assassination, retribution, betrayal and revenge was brilliantly realised.

The modern dress production was - as were the other plays in the trilogy (Henry IV and The Tempest) - set in a single-sex female prison. Nice idea. But it is one thing to have an ingenious concept, quite another to carry it out. Thankfully Lloyd's production is a triumph and proves that female actors can bring a fresh perspective to traditionally male roles. It was witty, liberating and inventive.

Occasionally 'real-life' would interrupt the action with the warders hastily intervening with lock-downs, cell searches and identity lines - and this just made the plot more immediate, more real. The anguish in the play was mirrored by that in the cells.

The use of heavy-metal music to evoke military conflict is excellent too. The drum kit being pushed into battle at full roar is magnificent.

If you like your Shakespeare modern, raw, and loud - go see.
Posted by overyourhead at Tuesday, November 15, 2016