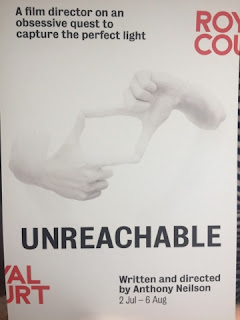 Last week Stuart and I went to see Anthony Neilson's Unreachable at the Royal Court in London's glitzy Sloane Square.

Some have called Unreachable "Unwatchable" which I think is a bit unfair. A bit. Most critics have given it 5 star reviews. Most critics are idiots.

Starring your own, your very own, Matt Smith as the director looking for the perfect light to shoot his next film the piece has much to admire about it and much that is frankly frustrating.

Firstly the good stuff. All the female leads are excellent. Amanda Drew as Anastasia the fictitious film’s producer is outstanding and almost holds the show together as a character and an actor. Tamara Lawrance as Natastia the fictitious film's female lead creates a character who is proud of having no empathy and who 'just acts' sad or happy or whatever - which is a genius swipe at method acting.

But now the not so good stuff. The play is a bit of a mess. The idea behind the structure is sure-footed enough - each scene in the play is acted out as if it were a scene in a film ( "Act One, Scene One" etc. is announced loudly before each scene) - but it's all just too sloppily realised. The action (and the actors) constantly trip over themselves exiting and entering stage left / right / front / back or wherever they are meant to be - but rarely pick themselves up again.

Matt Smith as the lead is rather weak too. We don't really believe in his character - or indeed care much whether his film gets made or not. And then towards the end of the first half a ridiculous character played by Jojo O'Neill arrives who all but capsizes the whole fictitious film production (and indeed the play). He shouts and protests and breaks the fourth wall and tries (out of character) to get the other actors to laugh. It all comes across like an overbearing actors' improv class - and a rather self-indulgent one at that.

And as if to confirm that the production has lost its self-confidence in its own conceit the last five minutes make you mouth three times in close succession… What?... What?!... WHAT?!

As I say, not without its merits but a frustrating waste of some good ideas.
Posted by overyourhead at Monday, August 01, 2016