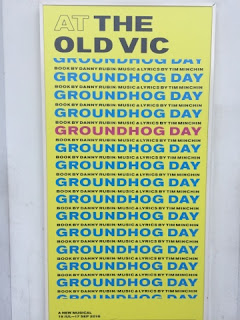 Last Friday night Stuart and I along with Roger and Kevin went to see a preview of new musical Groundhog Day at the Old Vic in London's glitzy Waterloo.

Yes Tim Minchin, the guy behind the rip-roaring success that is Matilda, has turned his attention to making a musical out of the much-loved time-loop film from 1993 Groundhog Day - and he has mostly succeeded. Mostly.

Groundhog Day is the story of Phil Connors, a cynical Pittsburgh TV weatherman who is sent to cover the annual Groundhog Day event in the isolated small town of Punxsutawney, Pennsylvania, when he finds himself caught in a time loop, forced to repeat the same day again and again… and again. As each day plays out exactly the same as before Phil becomes increasingly despondent.

Basically it's too long, too 'theatre'. I really wanted to love it - but I ended up sort of just liking it.

Naturally Tim Minchin proves to be a genius on the lyric front. I've always been a big fan of his and three or four of his songs do deliver in spades. His song on alternative therapies is a delight, his drinking song very funny and the fourth wall-busting heart-felt Being Nancy especially shines.

But overall the production disappoints. There is a fantastic cast and crew but after the wow that is Matilda this just doesn't hit the sweet spot. One act would have been enough, but it just carries on and on. That's not to criticise the inherent repeating within the plot-line of the book - it's just there is no development within the production - just repetition. And it becomes boring quite quickly, despite the effort of the hard working cast.

So, good try, it will no doubt run for a while, and it is quite good, but it could have been great.

Now if Mr Minchin came up with an original story lampooning alternative therapies... I'm in!
Posted by overyourhead at Tuesday, August 16, 2016