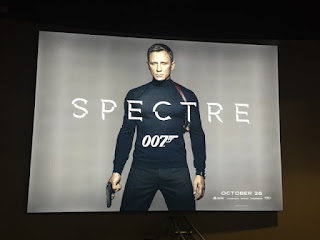 Last night I went to see SPECTRE at the Vue Cinema in London's glitzy Islington.

I've been ex-SPECTRE-ing you, Mr Bond.

Actually it was a bit rubbish. A sort of James Bond Greatest Hits - visiting lots of countries (getting there as if my magic), having lots of changes of clothes (without any luggage), having a couple of 'we've seen them all before' gadgets, the 'sex on a train' bit, one helicopter chase, one car chase, one sweeping camera shot of a mountain-top road chase and one groan-worthy easy escape while rescuing a damsel in distress.

The baddies were pretty poor too - from the below par Jaws semi-villain to the pathetic main villain. He didn't even say, "No, Mr Bond, I expect you to die" which might at least have got a laugh. And his villainous secret hideout was frankly an embarrassment.

And for long periods it was frankly boring. Even the sub-Roger Moore era jokes began to grate after a while, the scripts was piss-poor and there were way too many plot holes to mention.

And it was waay too long. People started getting their phones out in the final third and for a moment I was tempted to join them. And the groaning at the plot 'twist' when it came was audible. And where was the music? There were long scenes of utter silence. <Insert Bond theme here please>

On the plus side the opening titles were nice but it went pretty much downhill from there. New director next time please. These guys have run out of ideas.

Not so much James Bond as a substandard Spooks episode meets Romancing the Stone. 3/10.
Posted by overyourhead at Wednesday, October 28, 2015