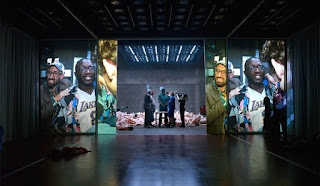 Inflatable sex toys, characters singing pop songs like Alanis Morissette's You Oughta Know and the cast using in your face video cameras - this was a grimy, aggressive and unashamedly contemporary production. I can imagine the final production meeting: "Not too gimmicky, is it? The neon lights and the plastic sex dolls?"

The plot itself is somewhat sexist - a brother's release from death row is dependent upon whether her virginal sister will offer her body up to the deputy in charge of the prison. Sure there is some humour to be had in the Duke disguising himself as a friar and being the ultimate undoing of the deputy's misdeed - but it's a problematic play at best and the (un)necessary gimmicks can only hide so much.

Brave effort. But it's not really Shakespeare (they cut out over an hour of the text). But fun to watch.
Posted by overyourhead at Tuesday, October 13, 2015