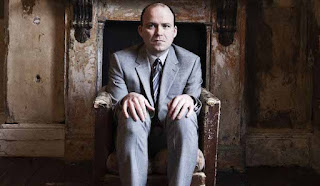 Last night Stuart​ and I went to see The Trial at the Young Vic in London's increasingly glitzy Southwark.

Before the play I had a pulled-port burger at The Cut Bar and it was delicious, sweet, spicy, and varied. Four words that could not have been used to describe the play we saw next.

Rory Kinnear is an outstandingly fine actor. This production was not. What should have been gripping just left us griping. Rather like the main character Joseph K. trapped in an awful world from which he cannot escape so Kinnear too is trapped in this arduous production.

When people use the adjective Kafkaesque, it is The Trial they have in mind - the nightmarish world of Joseph K., where the rules are hidden from even the highest officials, and any help there may be comes from unexpected sources. K. is never told what he is on trial for, and when he says he is innocent, he is immediately asked "innocent of what?"

Indeed the play has a constant, relentless atmosphere of disorientation and quirkiness. Superficially the subject-matter is bureaucracy, but the story's great strength is its description of the effect on the life and mind of Josef K.

That said, this production was frankly boring. The conveyor belt set was a nice touch but it soon got tired. This was no Brazil. No 1984. We just wanted Mr (unspecial) K. to meet his fate so we could go home.

Some people around us fell asleep. 'Nuff said.