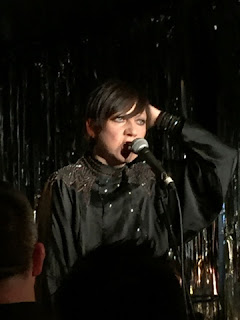 Last night Darren treated Stuart and I to a trip to The Glory in not so glitzy Haggerston to see the wonderful, the wondrous, the sublime techno diva Billie Ray Martin.

Born and raised in Hamburg Martin's early influences were 1960s soul and early 1980s industrial. This lead her to form Electrictribe 101 with whom she had a series of club hits. Going solo in the mid-1990s she has continued to produce music collaborating with a number of DJs and producers but rarely performing live.

So it was with much excitement that we ventured along to The Glory to see this rare thing - a Billie Ray Martin performance.

In the stifling heat of the pub Martin launched into Captain Drag, Dead Again and a number of other solo works. Her voice soared, the band thundered and feedback whined. Or was it feedback? No, it was the weirdly sounding theremin making it's sci-fi noises - humming, squeaking and screeching. But this instrument was a simply perfect complement to the evening; slightly weird, completely off the wall but deliciously off key. As if The Clangers had a house band.

Steve her sound guy was repeatedly chastised for the sound levels and the reverb and probably even the state of the Greek debt crisis. Everything seemed to be Steve's fault. But it was good natured chastisement. Billie and Steve obviously go back a long way.

Finishing up with the brilliant Talking With Myself and as an encore Your Loving Arms it was a night to remember.