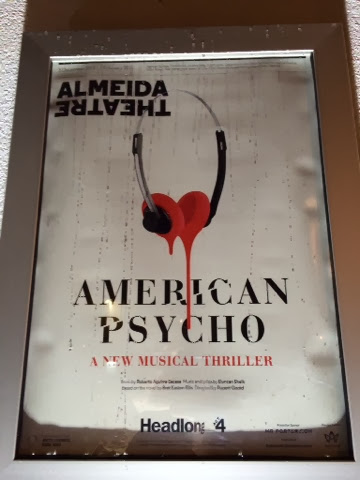 On Friday night Stuart and I went to to see American Psycho The Musical at the Almeida Theatre in London's trendy Islington.

Based on the controversial 1991 novel American Psycho by Bret Easton Ellis the tale is set in Manhattan during the Wall Street boom of the late 1980s, We follow the daily life of wealthy young investment banker Patrick Bateman whose thoughts turn to murder.

Matt Smith (yes, him) plays Bateman with a suitably (and suited) devilish charm. He can't perhaps hold a tune to quite the same high standard as his colleagues but that aside he carries the day.

The musical perhaps arches its eyebrow rather more than either the book or the film in that it plays it for laughs. But we like a show when the black humour is as dark as the blood is red.

A bevy of original songs are accompanied by a string of 1980s hits; Hip to Be Square, Don't You Want Me, Everybody Wants to Rule the World, True Faith and In the Air Tonight.

If it gets a West End transfer (which is rightly deserves) you should get ticket.

Posted by overyourhead at Monday, February 03, 2014