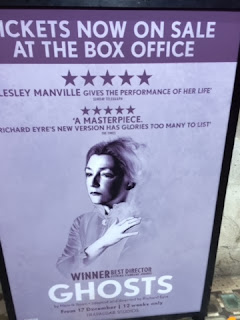 Last night Stu and I went to see Ghosts at the Trafalgar Studios in London's glitzy Westminster.

It was a night of loss, abuse, self-denial, lies, snobbishness, debauchery, illegitimacy, incest, disease, suicide, and evangelical pomposity. And that was just the foyer programme seller.

She plays Helene Alving, a rich widow stifled by several awkward relationships: with her son Oswald, an artist who has recently been living in Paris; with Manders, the local pastor to whom she was at one time attracted; and with her dead husband, whose memory she has chosen to honour by building an orphanage. There is also friction between her, her maid Regina (Charlene McKenna) and Jacob Engstrand, the devious hypocrite who is generally understood to be Regina’s father.

The play is superb - the acting top notch. I cried and cried at the raw emotion in the final scene. Bravo.

Posted by overyourhead at Friday, January 17, 2014