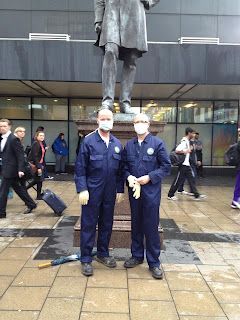 Last Thursday Stu and I went to the latest Secret Cinema event. We loved it. The event that is. Not so much the film.

We'd been pondering what the film might be this time round - but at a party the previous weekend someone had let the cat out of the bag albeit confirming a widely circulated rumour. Unfortunately I'd seen that film the previous day and Stu wasn't keen to see it at all. Oh well.

There had in fact been lots of clues in the video clips, Twitter, Facebook and emails we had been sent in the run up to the event and various articles in newspapers had plainly stated the film title so we perhaps should have cottoned on earlier.

Anyway, we were instructed to wear navy blue boiler-suits as Matter Analysts, join the company Brave New Ventures and meet at the statue of the Engineer at Euston station at 6pm sharp. We were then lead up the road to a disused 190,000 sq ft NHS transport depot which had been repurposed into a space ship.

Once we had arrived we exchanged our cash for bright plastic tokens so we could buy beer and ventured into the frankly cavernous event space.

We were there for three hours in which time we took off, went into stasis, travelled through space, drank a few beers and finally had to be 'evacuated' due to a 'contamination'.

The evacuation meant we had to go down to the 'escape pods' i.e. cinema downstairs and be given our 'protection eyewear' i.e. 3D glasses before getting a brief safety briefing/motivational speech from none other than Ridley Scott himself.

I won't say too much about the film as I have done so twice before except to say that Stu wanted to leave before the end. Oh dear.