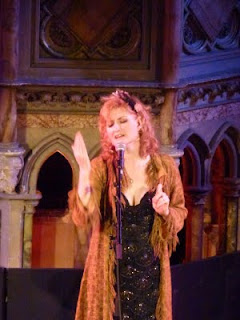 On Saturday night Stu and I went to see Eddi Reader perform at the iconic Union Chapel just off Islington's glitzy Upper Street.

Darren had originally secured the tickets but he was feeling a bit under the weather so couldn't make it. Which was a real shame - as she was great.

I love the Union Chapel and have written about it many times before. We had never sat upstairs though, which we did this time, and it's my new favourite spot. Great view.

I had seen Eddi perform at the Kirsty MacColl tribute gigs before but not do a full solo gig. I was in for a treat. She sang beautifully. She was joined on stage by her long term partner/songwriter and two other musicians. A simply staged ninety minute gig but filled with energy, humour and fantastic melody.

She sang a great song about her two teenage boys called "I Won't Stand In Your Way" - saying that she won't stop them going out all night in search the bright lights (despite sleepless nights worrying about them) because that's where they'll find the friends that they will come to reply upon later in life.

Sadly no "Dear John" but we did get "Perfect". Perfect.

Posted by overyourhead at Wednesday, April 13, 2011