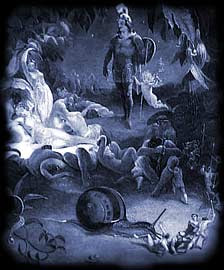 Last Friday Andy, Kev, Ian, Stu and I went to Shakespeare's Globe on London's glitzy Bankside to see the touring production of A Midsummer Night's Dream.

The play features three interlocking plots, connected by a celebration of the wedding of Duke Theseus of Athens and the Amazonian queen, Hippolyta, and set simultaneously in the woodland, and in the realm of Fairyland, under the light of the moon.

It was a very high spirited production; teleporting us to the era of the 1920s Bright Young Things it told the familiar story of love, confusion and mirth. In it we see the lovers Lysander, Hermia, Helena, Demetrius, the Fairies Oberon, Titania and Puck, and of course the workmen Snout, Snug and Bottom all suffer unwanted amorous attentions and mistake each others identities with hilarious consequences. As the Bard puts it in Act I Scene I, "The course of true love never did run smooth."

The performance itself was sexy, slick and funny - as you might expect from such a talented cast. A cast that was small - numbering just eight - but perfectly formed. With so many parts played by so few it might have been hard to follow but it was only on one occasion that the confusion of the characters on stage translated into any real confusion in the audience as to who was who.

If you've not been to Shakespeare's Globe before. Go. It's only £5 to stand in the yard and the shows are excellent.
Posted by overyourhead at Tuesday, May 18, 2010