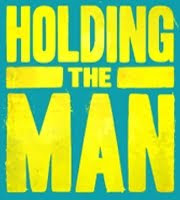 On Saturday night Chris, Christopher, Darren, Tim, Andy, Dean, Stu, myself and the rest of the gang went to see Holding The Man at the Trafalgar Studios in London's glitzy West End.

Timothy Conigrave's posthumously published memoir (on which Tommy Murphy's; Holding the Man is based) is highly regarded in Australia. The title derives from Australian Rules Football – “holding the man” is an offence that concedes a penalty. One of the characters in Murphy’s drama plays football, but his use of the phrase is, of course, more complex: it’s both literal and metaphorical. When Tim first makes a move to hold John, his classmate in a Catholic school in 1970s Australia, he initiates a love affair that will last, on and off, for the rest of their lives – and cost them both very dear. By 1994, both will have died from Aids – Tim tormented by the thought that his infidelities might have exposed John to HIV.

The staging of the play was basic but functional and served well. Four of the six-strong cast (including Kath and Kim's Jane Turner) performed impressive quick-change routines in the fast-moving production. The stars of the piece were undoubtedly the two leads though - Tim (Guy Edmonds) and particularly John (Matt Zeremes). They took us on a very funny (both 'peculiar' and 'ha-ha') journey from school-camp circle-jerk to a cringy Gay Soc meeting and a gruesome bar where the stylised conversation raises quite a knowing laugh; "Tee hee, ha ha, Babs, Judy, vagina, Rock Hudson, dizzy bitch, fist."

From this laugh out loud puppy love element in the first act Tim and John's relationship evolves, altering and faltering through separation and reunion. The play deepens just as they do, before the second act brings them face to face with HIV and eventually Aids. Moving though this development is, sadly it threatens to feel a bit dated to my tired old eyes - we had many an Aids deathbed drama in the late eighties and early nineties, from Larry Kramer’s ground-breaking The Normal Heart and Tony Kushner’s Angels in America, to William Finn’s wonderful one-act musical Falsettoland.

On a more positive note (pun intended), if a younger crowd do come to see the play this will be a welcome education to the scourge of Aids in the 1980s and 1990s. And nothing would bring this home better than the deep contrast between the funny first half and the bitingly emotional climax of the second half.

Come and see it. Better still bring your younger gay friends too.
Posted by overyourhead at Sunday, May 16, 2010