So: Graham Norton...
Four years ago we were regulars at the Screamers comedy night on Wednesdays at the Yard. Mainly a gay comedy club it showcased such talent as Tina C, Ursella Martinez and the wonderful Graham Norton. Now Graham has his own Friday night Channel 4 talk show, So:Graham Norton, which is also being screened in the United States and Canada too. So successful is he now that he has a string of awards including 2 Baftas, an International Emmy and another win at last night's British Comedy Awards for best comedy entertainment programme. Interesting to see that the "racy TV presenter" is set to get a talking waxwork in Madame Tussaud too. His waxwork, dressed in one of his Versace suits, will be ready to talk to visitors to the London Madame Tussaud's by the end of December. 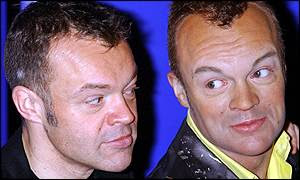 Apparently his figure will talk at the touch of a button - well, series of buttons in fact. Each rated (i.e. censored) for the appropriate audience. Ranging from a 'U' will be "I've had a full body wax and didn't feel a thing" through to '18' which will be "I'm not usually this stiff". Oh dear. Make you money while you can, Graham. Five series of "So" in a little over two years might be bordering on overexposure.
Posted by overyourhead at Sunday, December 16, 2001