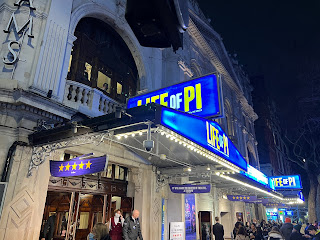 A couple of weeks ago Stuart and I went to see Life of Pi again at the Wyndham's Theatre in London's glitzy West End.

Based upon Yann Martel's eponymous philosophical novel and the 2012 film, Life of Pi is an epic show adventure full of hope... and puppets.

The protagonist is Piscine "Pi" Patel (played brilliantly by Hiran Abeysekera), an Indian boy from Pondicherry who explores issues of spirituality and metaphysics from an early age. He survives 227 days after a shipwreck while stranded on a lifeboat in the Pacific Ocean with a Bengal tiger called Richard Parker which raises questions about the nature of reality and how it is perceived and told.

The show is very special effects heavy (hence our second visit, the boat broke down first time) but all the better for that. The multitude of animals were puppets; some with single human handlers, some with many - Richard Parker alone took three people of control him.

There were lots of laughs too. The staging was great. And the philosophical magical realism worked well too.

Some of the supporting roles perhaps didn't meet the high-water mark set by Abeysekeraof but it was him we came to see / sea.
Posted by overyourhead at Wednesday, February 02, 2022