The Mirror and The Light @ Gielgud Theatre... 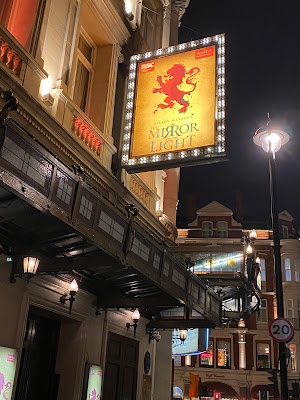 Last Friday night Stuart and I went to see the thrilling stage finale to Hilary Mantel's Wolf Hall trilogy, The Mirror and The Light, at the Gielgud Theatre in London's glitzy West End.

The trilogy tells the story of the rise and fall of Thomas Cromwell, Henry VIII’s chief fixer, who rose from poverty to become one of the most powerful men in English history. The Mirror and The Light very much concerns itself with the fall!

Adapted by Hilary Mantel herself and Ben Miles (who plays Cromwell) condensing the 900-plus page into a tight two-and-a-half-hour show can't have been easy.

We get a lot of Henry VIII's (Nathaniel Parker) troubled love life: the aftermath of Anne Boleyn’s execution, his brief happy marriage to Jane Seymour (Olivia Marcus); his briefer, much less happy marriage Anna of Cleves (Rosanna Adams). We see Thomas Cromwell (Ben Miles) bring about a reconciliation with the king’s fanatical daughter, Mary (Melissa Allan). And, of course, there’s the fallout from Henry’s schism with the church and dissolution of the monasteries, who leads to a revolt in the North.

Ultimately unable to negotiate Henry’s capricious whims though Cromwell is admitted to the Tower of London on charges of treason and heresy. Squaring up to his enemies - mainly Norfolk (Nicholas Woodeson) who is desperate to take the country back to the way it used to be - Cromwell is increasingly haunted by the ghosts of the friends he tried and failed to save, notably his mentor Cardinal Wolsely (Tony Turner). Cromwell, despite being a shifty political operator, is finally out of his depth.

For us the audience, the end, when it comes, is a bit of an anti-climax though - having been so heavily foreshadowed.

The play is less of a tragedy and more of a funny political thriller. And, yes, there are parallels with Brexit too - self-interested English politicians tearing up the status quo without much idea of what they’re doing has a clear resonance.
Posted by overyourhead at Wednesday, October 20, 2021