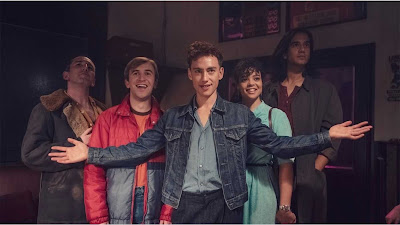 Really looking forward to catching up with It’s A Sin. We're on Episode 4. People say it’s good one.

The show is bringing up such strong and personal emotions for many. And some particularly sad ones for me. I lived also in a big gay house in the mid-1980s. Mine was in Fulham. 7 gay men together all in our own rooms. One bathroom. One kitchen. Wild parties. 4 are now dead. We all fiddled while Rome was burning. I went to way too many funerals. Too many memorials.

10 years later it was worse. Of the 45 or so friends at my 30th birthday party at my flat in Finsbury Park, 9 are now dead.

Returning to the show, I’ve seen some very negative reactions too - many from people wanting to see more. More about women/lesbians. More about the gay politics and class politics of the time. More about the fear/shame of getting tested. But it is a drama after all - not a truth and reconciliation exercise. Impossible to address everything in just 5 short episodes. Russell T Davis originally planned 8 but C4 said they only wanted 5. Which is such a shame.

I hope RTD writes more about the topic though. Series 2? It has had such a great reaction. So maybe.

A powerful watch. It’s must-see TV on a Friday night. Bring on episode 4.
Posted by overyourhead at Tuesday, February 16, 2021