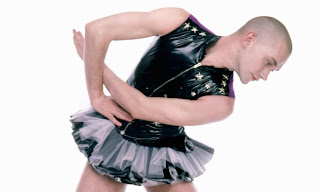 This, the first major exhibition of dancer and choreographer Michael Clark, explored Clark’s work as he became established as a radical presence in British cultural history. Much of the presentation consisted of a large archive of Michael Clark Company performance footage and interviews and the giant hanging screen displays had a strange memorial feel.

Michael Clark had a meteoric rise as a young choreographer in the 1980s. He left the Royal Ballet School in 1979 before his finals and danced his first solo in a Richard Alston piece for the Ballet Rambert just two years later. The exhibition presented not only film of his work since, but photography, and other material alongside his collaborations across visual arts, music, and fashion.