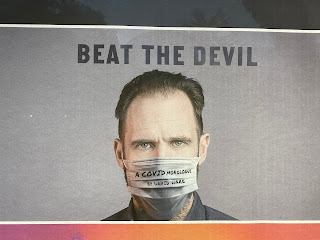 There's something marginally meta about the event. Here we are, in the grip of a deadly pandemic that is both killing people and reshaping society, sitting in our masks in a socially distanced theatre, with its seating capacity reduced from 900 to some 250, listening to a bulletin from the front line that we are still fighting on. 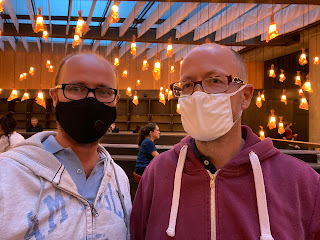 But Hare has always been a master of this type of instant response, combining journalistic rigour with an intense sense of the urgent, to report on everything from the state of the railways to the state of Israel, the war in Iraq and the Labour party, always using his questing curiosity as prompt to discover and explain.

That means that his description of his own, serious, encounter with coronavirus – which felled him just as lockdown began and reduced him, by Day Ten to "total despair" – is recounted with vivid, forensic detail. As the "dirty bomb" of the virus is thrown into his body, he lists the havoc caused: the fever, diarrhoea, vomiting, herpes, delirium, and the way everything tastes and smells of sewage. "I haven't yet seen this symptom listed as common," remarks Fiennes, wryly. He notes the fuzzy lungs, the sticky blood, the sense that he has "swallowed a Catherine wheel." 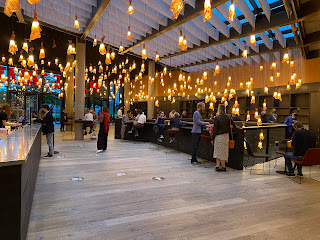 He also draws wider conclusions, following the bafflement of the doctors and their descriptions of this ever-changing virus as "medieval" in its impact and cruelty. And of course, he looks to the government, whose descent into its "mad phase" coincides with his own; his own symptoms are becoming more pronounced at the same time as the body politic reveals itself to be diseased. Faced with Priti Patel's outright denial of the government's failure to provide its doctors and nurses with PPE, he observes "if I wasn't gagging anyway, I'd have gagged."

Your view of this furious indictment of a government who have made mediocrity a dirty word – "mediocrity suggests middling, These people are incompetent " – possibly depends on both your politics and your experience of Covid-19. I have noticed that many Covid survivors share Hare's fury at the sheer inefficiency of this government in response, and his suggestion that this is a betrayal beyond the scale of Suez and Iraq would find wide support.

But whatever your view, it would be impossible to deny the power and passion of Hare's writing and his remarkable ability to find humour in the midst of the most savage denunciations of what is going on. When a friend suggests he is unusual in being a middle-class Covid sufferer, he is appalled: "Perhaps I have crossed class lines in accidentally getting a disease that targets manual workers and ethnic minorities."

What makes Beat the Devil such a fine piece, though, is that it contains a multitude of emotions besides fury. It's full of love for Hare's wife, Nicole Farhi, who convinced of her own indestructibility and consumed by care, lays her whole body across her husband in an attempt to warm his Arctic chills. There's deep compassion for the bereaved, and those who – arbitrarily – have succumbed to coronavirus when Hare has survived. And there's a heartfelt plea, too, for honesty in government on the simple but convincing grounds that the most "soothing bandage for grief, is the truth."

All is this is magnificently realised by Fiennes, who under Nicholas Hytner's quietly efficient and detailed direction, uses all his own sensitivity and charisma to create a portrait of a man undone by an illness that seizes him like a demon, and yet determined to use the experience for good. "I am started to come out of the experience a hippy," he says, with a look of wonderment at his gratitude for the everyday.

The play itself, indoors, in a theatre feels like that: an act of pleasure, defiance and assertion, a return to something that Hare has been doing for 50 years to explain and understand the world around him.
Needless to say, both Stuart and I loved it.
Posted by overyourhead at Wednesday, September 02, 2020