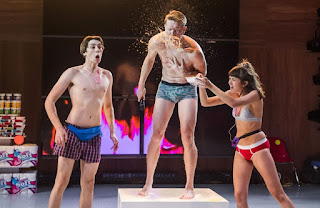 OK, that's a bit unfair. The play - when I saw it back in 1996 - was a scathing, semi-abstract satire on the transformation of human relationships from the emotional to the transactional. Ravenhill was making the point that in this world of consumerism our emotions have been replaced by transaction: you pay for sex, you pay for companionship, you pay for drugs, and you pay to feel. And nowhere was this happening more than in the gay world of the 1990s. So that's what he wrote about. The world he knew at that time; sex, drugs and clubbing and how it was all about the money.

Only this production sadly drowns any of this socio-economic commentary in a sea of brightly coloured, flashy, empty noise. The three main characters no longer live in a bed-sit and spend their night going out clubbing but inhabit a TV studio piled high with cheap products which they try and sell. And in a masterful misstep by Holmes the cast are forced to break character (and the fourth wall) to try and sell this tat directly to the audience. This audience interaction is weak, unnecessary and brings any suspension of disbelief crashing to the plastic floor. Yeah, we know about consumerism. We paid to get in!

There is real drama to be had in the play as the rent boy who is being abused tries to find love. But this message gets somewhat lost when the actor playing him turns to the woman in Row A dressed in only his pants and tries to sell her a Chicken Curry Pot Noodle.

Sadly the production values are simply rubbish too - the set looks like a tip and the lighting is crude and (ironically) unilluminating. There were audible groans towards the end as each fresh stage gimmick was trotted out. 'Slow dance with an audience member' had people avoiding eye contact with the cast unless they got chosen. A few people left. If we weren’t mid-row we might have followed them.

I can't put it better than one critic pointing out it's like "an acid-drenched collision of ‘The Word’ and the QVC shopping channel."

In the end the thing that sealed the terrible evening for me was the constant karaoke interludes. Randomly the cast were called upon to sing a pop classic at the audience - Labi Siffre's Something Inside So Strong, East 17's Stay Another Day - you get the idea. But to suggestion that music is as hollow as shopping and fucking is certainly not a point Ravenhill ever tried to make in this piece. Why torture us with it? So at that point - I was out.

This play deserves better. Much better.
Posted by overyourhead at Friday, October 28, 2016