A View From The Bridge... 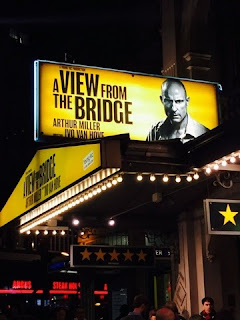 Last night Stuart and I went to see Arthur Miller's seminal play A View From The Bridge at The Wyndham's Theatre in London's glitzy West End.

And wow, it was an amazing production. Delightful, thrilling, funny, scary, sexy, harrowing, claustrophobic, and menacing.

Deceptively simple staging with a single chair as a prop and performed in the semi-round you felt up close and personal to each and every nuanced emotion of the brilliant cast.

Staged by Belgian director Ivo van Hove with lead actors Mark Strong (as Eddie), Phoebe Fox (Catherine), and Nicola Walker (Beatrice) the production has been a huge success at the Young Vic before it's transfer up West.

The play is set in 1950s America, in an Italian American neighbourhood near the Brooklyn Bridge in New York. It employs a chorus and narrator in the character of Alfieri. Eddie, the tragic protagonist, has an improper love of, and almost obsession with his orphaned niece, Catherine. Eddie's wife Beatrice is supportive of Catherine's endeavours to strike out on her own in the world but Eddie infantalises her and his over protective nature is almost unseedy.

Enter stage left two of Beatrice's cousins from Italy (the two gentlemen from Verona?) who are there illegally as work is scarce back home. Marco is a strong hard worker whereas Roldolpho is effeminate in nature, singing, joking, dying his hair blonde, cooking and making dresses. Catherine falls for Roldolpho and when they plan to marry against Eddie's wishes trouble comes a-knocking. Just what lengths will Eddie go to keep these star-crossed lovers apart?

As you can tell I detected a strong Shakespearean element to the play although the obvious parallels are to a Greek tragedy.

If you get a chance to go, do. Best show in the West End at the moment. 5 stars.
Posted by overyourhead at Tuesday, March 24, 2015

Email ThisBlogThis!Share to TwitterShare to FacebookShare to Pinterest
Labels: A View from the Bridge, London, Wyndham's Theatre, Young Vic