Women on the Verge of a Nervous Breakdown... 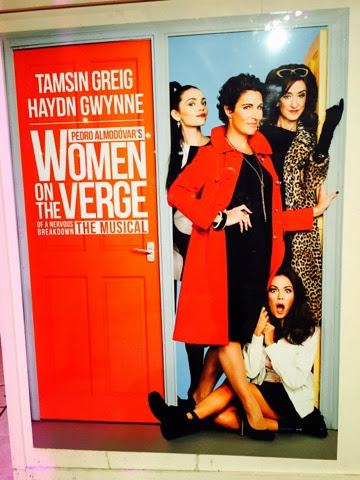 Last night Stuart, Andy and I went to see new musical Women on the Verge of a Nervous Breakdown at the Playhouse Theatre in London's glitzy West End.

With theatre and TV star Tamsin Greig in a leading role of Pepa Marcos this manic, frantic, neurotic whirlwind of a musical simply beats you into enjoying it.

And this was pretty high drama; love, betrayal, revenge, a gun, a terrorist, attempted suicide, a china duck...

But for high drama to be funny it either needs to take itself so seriously that it allows the farce to come punching out (we are laughing *at*) or the characters need to realise the situation that they are in is absurd and encourage the audience in on the joke (we are laughing *with*). Here things perhaps trod rather dangerously near that laughing at/with line.

But that minor quibble aside it was great fun - once you got up to its energy levels.

And the singing was perfectly respectable if the songs instantly forgettable. "Tasmin Sings!" should be on the poster. Because she does so. Very well.

The plot was enjoyably confusing and very funny, but then it would be based on the fantastic Pedro Almodóvar film.

In fact the whole production was perfectly serviceable; the set was rather spartan but quite in keeping with 1987 Madrid.

What raised things up was Tamsin Greig herself. The character she plays is the heart and soul of the piece and she plays it note perfect. You are with her from the get-go and wanting everything to work out for her. This really sells the piece.

Apart from Ms Greig the other standout player is Haydn Gwynne as jealous ex-lover Lucía. She is a comic creation that could standalone. She is passionate, wronged, contradictory, and very funny. Ms Gwynne brings all this out in spades.

So my verdict. Recommended (but with minor reservations.)
Posted by overyourhead at Friday, January 16, 2015