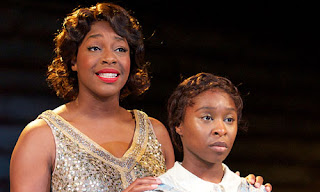 Last week Darren organised a trip for Rachel, Chris, Hudd, David, Mark, Tim, Stu and I to go and see The Color Purple musical at the Menier Chocolate Factory in London's not so glitzy London Bridge Quarter (LBQ).

It was an outstanding show with great songs - magnificently sung by a superb cast. Head and shoulders above these faultless singers was Cynthia Erivo who played protagonist and narrator Celie. She sang her heart out and us into hers.

Celie is a poor, uneducated black woman with a sad personal history who not only survives a stepfather who rapes her (something we don't see) and steals her babies (something we do) but also survives an abusive husband (the focus of the piece.) As an adult, Celie befriends and finds intimacy with a blues singer, Shug Avery, who gradually helps Celie find her voice - quite literally. By the end of the musical, Celie is a happy, independent, and self-confident woman. And boy are we in for a rough ride. Well, it perhaps should have been a little rougher in my opinion. Not that I wish ill of her as a character. It's just that the book pulls no punches with its depiction of abuse, betrayal and revenge. We got zipped through the main plot points touching rather too lightly upon each rather than getting gripped by the dramatic turns of events. This meant that the musical came across as a little too family-friendly for my liking perhaps demonstrated best by the happy ending which was a tad too sweet for my taste. There is a room here for an edgier adaptation I think.

That said, there is much here to marvel at. The vivid depiction of generations of black men still treating their womenfolk with the same odious strictures as slavery sends a powerful and salient message. It seems only the menfolk have truly broken from their yolk of oppression. This message translates from the book beautifully.

The run has ended now at the Menier Chocolate Factory but since it was largely sold out here's hoping it gets a much deserved West End transfer.

Posted by overyourhead at Tuesday, September 17, 2013