The Drowned Man: A Hollywood Fable... 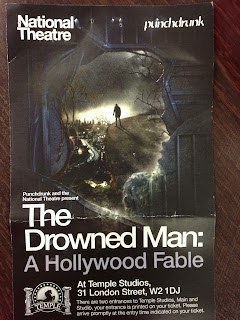 Last night Stu and I went to Punkdrunk's The Drowned Man: A Hollywood Fable in the imagined Temple Studios in London's not so glitzy Paddington.

Billed as a promenade experience we walked around a vast cavernous ex-Post Office sorting office dressed as a number of film sets. In the back lot were the dressing rooms, the props rooms the make-up, costumes and the wigs. On set were the desert, an ice lake, various interiors and the forest. No really.

We were silent and wearing masks as the actors danced around us playing out stories of love, betrayal and death.

It was a truly immersive experience with loud environmental noise, dimmed rooms and secret passageways. All great fun. It was at times exciting, at times boring. You needed to seek out where the action was taking place - which itself could be a bit of a challenge. You'd walk into a room just as some episode was finishing. Or the other masked patrons would be crowding around something so you, standing at the back, couldn't see.

Still, the attention to detail was sublime. Every shop, every hotel room, every scarecrow's funeral, every changing room was meticulously dressed.

It was a sort of Secret Cinema but without the film. It was our first Punchdrunk performance and I don't think it'll be our last.