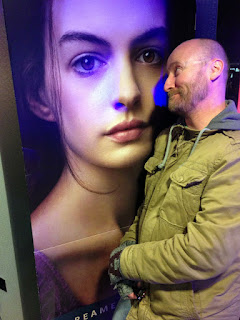 In a word the Les Misérables film was excellent. All the leads acted their socks off. Anne Hathaway particularly so (Oscar winning I imagine.) I burst into tears 7 times. The first occasion was at the ticket prices!

And let's get this out of the way, Russell Crowe singing isn't that bad actually. But expectations were low!

The strongest element in the production for me was the brave (and ultimately triumphant) live singing / close-up camera work. It was very effective. You could see every emotion playing across their 40ft high faces as they sang which really had you in the palm of their hands. You could almost see into their minds.

I thought Eddie Redmayne was fabulous. Empty Chairs and Empty Tables had me at the first line. He was convincing, handsome and tuneful. And Amanda Seyfried was a revelation. Never really rated her in stuff I'd seen her in before - especially Mamma Mia. But she really carried it off well. She sang beautifully, wasn't too coquettish, and above all carried off that love-at-first-sight thing that the love interest in musicals generally have to go through.

Samantha Barks as Éponine was good too. Had me in tears - twice.

But we do need to talk about Hugh Jackman. He was... er... well... 'good'. He acted well. But.. he did have a few duff lines in some of the songs and didn't quite carry off the part as I had hoped. I wanted a better singer I think. Our Hugh kept singing vibrato which was a tad annoying! Hold a note man!

Sacha Baron Cohen and Helena Bonham-Carter as les Thénardiers were great too. Funny, wicked and actually able to sing!

The producers could have so messed it up this film as many stage to film musical adaptations do (yes I'm looking at you Hair, Evita, Phantom et al) but they didn't. Faithful yet innovative.

If you do go take tissues. (And in this case it's not a euphemism - really take them!)

Posted by overyourhead at Tuesday, January 15, 2013