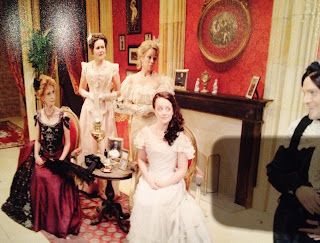 Set in 1890, two students at Oxford force their rascally friend and fellow student to pose as an aunt from Brazil - where the nuts come from - so they can persuade their sweethearts' guardian to let them propose.

It's one of those trickiest of pieces, a traditional farce. A genre that hinges on the skill of the central performances. Most of which were excellent. Most.

Starring Mathew Horne (him off of Gavin and Stacey), Jane Asher (her with the cakes), Norman Pace (him off of Hale and Pace) and Steven Pacey (him off of Blakes 7) it was certainly a stellar cast. Stand-out performance was Steven Pacey. He was funny, sweet and believable as father of one of the young suitors. The weakest performance however was Mathew Horne. He just wasn't convincing in drag as the 'aunt'. He should either have camped it up a bit more to be hyper-real pastiche or tried to be more convincing as a woman. Basically he should have either have gone for Pantomime Dame/Dockyard Doris or Mrs Doubtfire/Tootsie.

Worth a visit though. We did laugh.

Posted by overyourhead at Friday, September 28, 2012