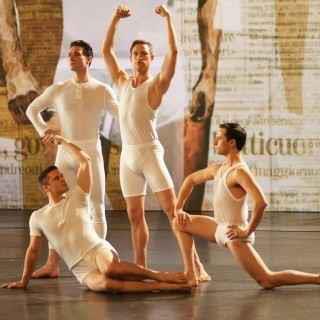 Last night Stu and I went to see Matthew Bourne's Early Adventures at the Sadler's Wells in London glitzy Islington.

As part of the company’s 25th Anniversary celebrations, Matthew Bourne has returned to his roots in Early Adventures, a programme of three early hit pieces that launched the career of “Britain's favourite choreographer” and saw the birth of the style, wit and sheer entertainment that have become hallmarks of the New Adventures company today.

Funny, dashing and joyful. We loved it.

SPITFIRE – An advertisement divertissement (1988) was Bourne’s first hit, and something of a signature piece. It places Perrot’s famous Pas De Quatre, made as a kind of diva-off for the four leading ballerina’s of the 19th Century, in the world of men’s underwear advertising and mail order catalogue photography. Both a celebration of male vanity and an affectionate comment on the preening grandeur of the danseur noble, “Spitfire” was last seen at the Dance Umbrella 25th Birthday Gala in 2006 in a 6 man version. Here it's in its original 4 man version with all of the original solo’s restored.

TOWN and COUNTRY dates from 1991 and has never been performed since. It is remembered, though as the piece that most crystallized the Bourne style; gloriously witty and ironic, but also strangely moving and heartfelt. In “Town and Country” this most English of choreographers looks at notions of national character and identity from a bygone era through the evocative music of Edward Elgar and Noel Coward amongst others. Almost a dance-revue in structure, it includes a potted 3 minute version of the classic film “Brief Encounter” , a “green carnation” encounter between two repressed gents, a clog dance with a “violent” conclusion, a touching “Wuthering Heights” themed love story, a daring and wild ride on children’s scooters and an eccentric version of “Pomp and Circumstance” played on the ukelele!

THE INFERNAL GALOP – “A French dance with English subtitles” - premiered in 1989 and is typical of Matthew Bourne's early work; "a Franglais Spectacular" and a characteristically witty and astute satire of English perceptions of the French, inspired by all the familiar and much loved icons of France in the 1930s and 1940s: Edith Piaf, Charles Trenet, Tino Rossi, Mistinguett and so on. In a series of surprising and charming vignettes, Bourne evokes the period, with all kinds of sly humour and “Ooh-la-la”, setting his dances to the familiar and distinctive cabaret chansons of gay paree, before closing with the inevitable "infernal galop" as Offenbach's famous can-can from Orpheus in the Underworld is correctly titled. On the way, he pokes fun at the grand French amour, a lowlier encounter in a street pissoir, the pretensions of the fashion industry catwalk, and the recurring image of the matelot, much beloved of Cocteau and Genet. Typical of The Infernal Galop's intelligent inner wit, is the unexpected treatment of the great post-war hit “La Mer” (The Sea), sung by its composer Charles Trenet, offering an effetely dressing-gowned merman, serenaded by a trio of sailors! A similar approach is brought to the hilarious intrusion of a street "band" into a covertly romantic encounter, or the intentionally overblown lovers' duet for Piaf's famous “Hymne a l'Amour”. This is France as seen by the uptight English imagination, an equal mix of ancient hostility and deep affection, with all the traditional clichés joyously paraded for our entertainment!