Last Friday night Stu, Oliver, Steve and I (plus new friends Ian and Nicole) were chased around Soho by huntsmen and a pack of dogs.

Slingshot's latest urban game was called Hounded and it started from Soho Square. There were about one hundred of us in teams of six dressed as foxes - OK we just had large orange tails on - but we were to be chased by real, live dogs though.

Before the start we had peppermint sprayed on the bottoms of our shoes so the hounds could track us and from there on in we were pretty much on our own. As foxes we had two minutes head start and our task was a) to not get caught by the hounds otherwise we would lose our tails (and twenty points), and b) to try and discover and follow various scent trails that lead all over Soho.

To follow these scent trails there were 5" square pads attached to dozens of lampposts, street signs and bollards and we had to get up close and personal, sniff them and detect a particular smell and follow it. Following say the 'mint' smell would lead us to a secret word at the end of the trail which we then had to text back to base. Collecting these end of trail words gained us points. The longer (and often smellier) the trail the higher the points. 'Swamp' was particularly horrid. Needelss to say many of the trails over-lapped so we had ur foxy work cut out for us.

On the plus side if we did lose our fox tails to the hounds we could then become hounds ourselves and chase other teams' foxes to grab their tails and get bonus points for each one we caught.

In the end the team with the most correct 'smell words', had the fewest fox tails missing and had managed to snatch the most competitor's tails won the game.

It was great fun. The adrenalene was certainly pumping as we dashed down various streets, back alleys and passageways criss-crossing through Soho. The area was full of Friday night drinkers and we sure got some weird looks as we sniffed the street furniture - but we didn't care. We were being chased and had the scent in our nostrils.

In the end we came second. Which wasn't too bad out of sixteen teams. Our team name was Megan and The Basils (geddit?!)

(There are bigger version of the photos below here) 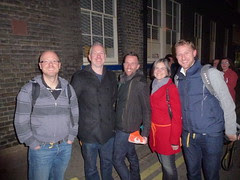 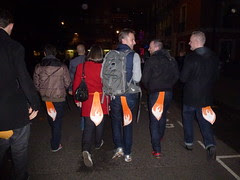 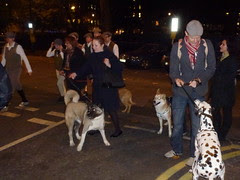 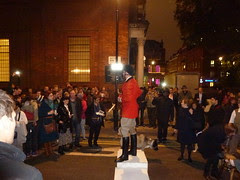 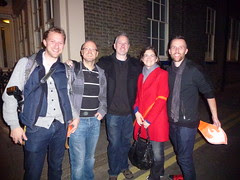 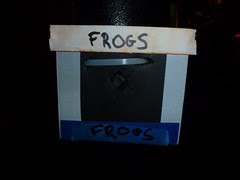 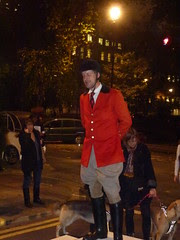 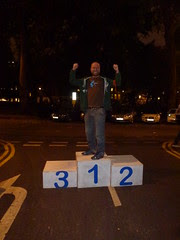 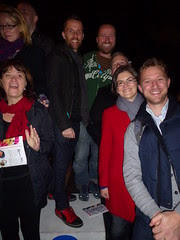 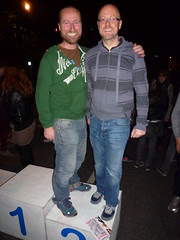 Posted by overyourhead at Tuesday, November 15, 2011