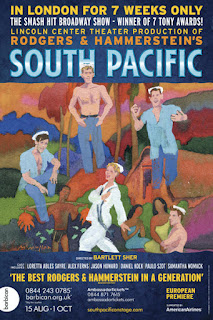 Last night Stu and I went to see a production of Rogers and Hammerstein's South Pacific at the Barbican Theatre. It was a transfer of the 2008 Broadway revival at the Lincoln Center.

Samantha Womack plays Nellie, an American nurse, on a U.S. Naval base during World War II. She falls in love with an expatriate French plantation owner with a dark past.

It's a fun show but not without it's serious side. Racial prejudice is addressed in the show directly as Nellie tries to accept her lover's mixed-race children from a former relationship. This theme of prejudice is further explored about another mixed relationship in a surprisingly subtle but powerful song You've Got to Be Carefully Taught.

The comic element is seabee Luther Billis deftly played by EastEnders bad-boy Alex Ferns. Perhaps his American accent wasn't the best but he made up for that in gusto.

The famous songs from the show are of course Bali Ha'i, I'm Gonna Wash That Man Right Outta My Hair, Some Enchanted Evening and Happy Talk. These were all delivered with much aplomb.

It was a solid performance. We really enjoyed it. But as it's still very early in it's run there is perhaps some room for settling in.

Posted by overyourhead at Thursday, August 18, 2011