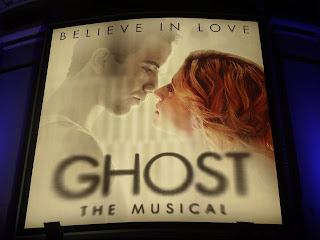 On Friday night I took Stu to see Ghost The Musical at the Piccadilly Theatre in London's glitzy West End.

Based on the Patrick Swayze / Demi Moore / Whoopi Goldberg 1990 film, the show started rather tepidly. But as the evening rolled on it got better and (and somewhat camper). As might be expected the Oda Mae Brown character rather stole the show.

And blimey modern special effects have come on - the entire set was a virtual creation with subway trains, windows, rain, dancers, all created on split-level video walls. The 'ghost' magic was good too; walking through doors, grabbing objects et al..

The acting was good, the singing too, but the songs were fairly forgettable. We paid £65 a ticket - maybe wait for the £20 tickets though IMHO.
Posted by overyourhead at Monday, July 11, 2011