Much A Doctor Who About Nothing... 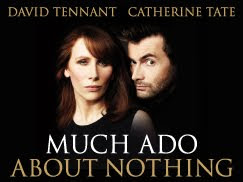 "I do love nothing in the world so well as you, is not that strange?"

Last night Stu and I went to the Wyndham's Theatre in London's glitzy West End to see David Tennant and Catherine Tate appear together on stage for the first time in a brand new production of William Shakespeare’s timeless comedy Much Ado About Nothing.

The story tells of two young lovers, Claudio and Hero, who are to be married imminently but the devious scheming of a resentful Prince looks set to thwart the nuptials. Meanwhile, marriage seems inconceivable for reluctant lovers Beatrice (Catherine Tate) and Benedick (David Tennant) whose endless witty sparring threatens to keep them apart forever. And hilarity ensures.

It was a 1980s resetting - which worked surprisingly well. There were subtle references to Miami Vice, Wham!, Kylie and Jason, Princess Diana, and Adam Ant.

We laughed and laughed. OK, there were plenty of modern asides that might shake the Shakespearean purists to their core but we loved it. David Tennant was great. Catherine Tate was brilliant.