Protest The Pope March and Rally...

On Saturday afternoon me and 10,000 (30,000?) other people marched down Piccadilly, through Trafalgar Square and into Whitehall to protest against the Pope's state visit to Britain. Lot's of inventive signs were on display.
More pix here.
Why “Protest the Pope”? The diverse groups who support this campaign have many different reasons for not approving of the State Visit to the UK by the Pope in September 2010. They all however share the following view:
* That the Pope, as a citizen of Europe and the leader of a religion with many adherents in the UK, is of course free to enter and tour our country.
* However, as well as a religious leader, the Pope is a head of state and the state and organisation of which he is head has been responsible for:
1. opposing the distribution of condoms and so increasing large families in poor countries and the spread of AIDS
2. promoting segregated education
3. denying abortion to even the most vulnerable women
4. opposing equal rights for lesbians, gay, bisexual and transgender people
5. failing to address the many cases of abuse of children within its own organisation.
6. rehabilitating the holocaust denier bishop Richard Williamson and the appeaser of Hitler, the war-time Pope, Pius XII.
* The state of which the Pope is the head has also resisted signing many major human rights treaties and has formed its own treaties (‘concordats’) with many states which negatively affect the human rights of citizens of those states.
* As a head of state, the Pope is an unsuitable guest of the UK government and should not be accorded the honour and recognition of a state visit to our country. 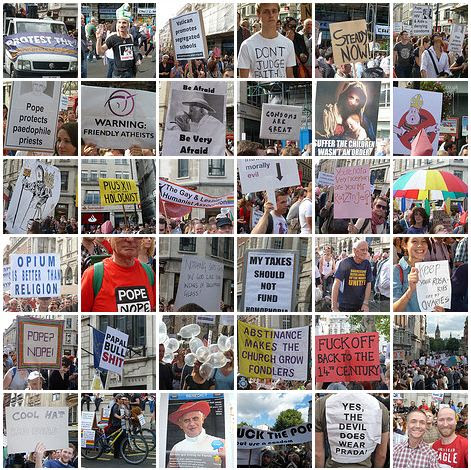 Posted by overyourhead at Monday, September 20, 2010