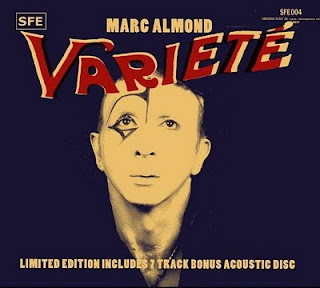 The show was also partly to promote his recent album Varieté‎ - a largely self-composed collection of cabaret sleaze numbers much like those found on his mid-80s albums.

And what a show it was! Marc was uplifting, exciting and just plain happy to be there. He was full of energy - dancing around, jumping on the piano, singing his heart out and probably enjoying himself as much as we were watching him.

He rattled through a suitably diverse, but all too brief, seventy-five minute set and I just couldn't stop smiling and laughing at each fresh interpretation of each song. Smiling, laughing and dancing.

I think that without doubt it was one of the best Marc shows I have ever seen.

The set list was (as far as I can remember):
Intro
Tears Run Rings
Open All Night
Nijinsky Heart
The Exhibitionist
Trials Of Eyeliner
Bread And Circus
Cabaret Clown
Variety
Jacky
Brilliant Creatures
Sleaze / Take a Walk On The Wild Side
Black Kiss
Joey Demento
Tainted Love
Bedsitter
Run With The Devil

The last song Run Like The Devil by Kenny Roberts (thanks for the heads up on that Darren) and after he finished perfroming it Marc joked that his next album might be "an album of obscure Northern Soul classics". Let's hope so!

I'm with Peter: "So I'm dead chuffed that I chose to go to this rather than the HMV signing on Monday. The whole show was just very uplifting and exciting."

Roll on Bexhill-On-Sea.
Posted by overyourhead at Thursday, June 10, 2010