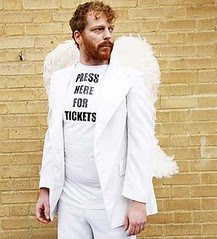 Last night Stu and I went to the Soho Theatre to see the rather wonderful Kim Noble in Kim Noble Will Die. Oh my giddy Aunt!

The poster said, "Contains strong material that may shock or cause offence. OVER 18s ONLY." Too bloody right! Blood, sex, ejaculations, Floella Benjamin, suicide, you name it...

To call it a ground-breaking mix of comedy, video and avante-garde theatre would be putting it mildly. Horrifying. Visceral. Hysterical. Hilarious. Inspiring. Genius. Unwatchable. Pornographic.

Don't just take my word for it:

'Shocking, beautiful and profound. It will blow your mind'
****** (Six Stars) Time Out
'The most remarkable thing I’ve seen this year... People blather on about the cutting edge of comedy. Well, for once, here it is'
**** The Times
'Five stars don't even touch the sides of what this breath-stopping show deserves'
***** The Scotsman

Posted by overyourhead at Wednesday, December 09, 2009