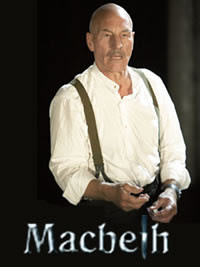 Last night Paul, Simon, Stu and I went to see Macbeth at the Gielgud Theatre in London glitzy West End.

Wow! What a show! It says here, "Macbeth is one of Shakespeare's most bloody and fear-filled tragedies" and they got that right. We were on the edge of our seats. The settings were more Stalinesque than Scottish, more white tiled military hospital ward than cold damp castle. But what a great production idea by Rupert Goold - brilliantly executed.

Patrick Stewart was the murderous Macbeth (and no, no-one shout out "engage" or "out, out damn'd Scotty" but we were tempted). And he didn't just play Macbeth he was Macbeth. Quite fabulous. Equally fantastic was Kate Fleetwood as Lady Macbeth.

What a great night at the theatre!
Posted by overyourhead at Friday, November 30, 2007